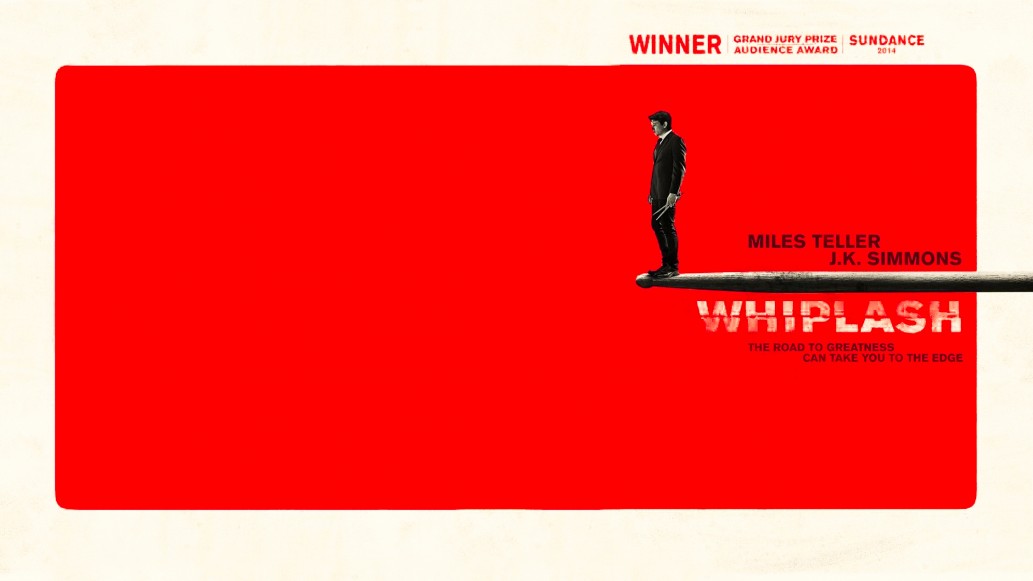 I stepped back from reviewing for a little while because,
To be blunt,

That includes the Sons Of Anarchy finale,

The Boardwalk Empire finale…or the whole final fucking season really…. (they should have taken off an extra year to make it fucking awesome instead of giving us what they did.
Plus, I re watched the entire “HBO’s Rome ” series to pay it homage and give it a solid well deserved review…which I am working on currently)

Then my cousin, Matt Candela of That’ll Play.com & podcast with Matt & John (Nuzzi)

Wrote me and said he just saw Whiplash and it was fucking amazing.

I didn’t know what it was at that point.

Finally watched a trailer for it, thought…

Then I saw it Sunday night.

And this movie rocked my fucking face clean off.

I was taking notes during it to give a solid review to you…
Then the ending climax happened, and as soon as the film finished I immediately started this review.

I love the drums man, always have.

Nothing like a good drummer, John Bonham, Dave Grohl… Pearl Jams original drummer Dave Abbruzzese and Jack Irons who came after him for No Code and Yield. The band, in my opinion, lost a ton when they moved away from the original drummers…because a core facet of the music, it’s foundation had changed.

Even Guns and Roses, original drummer Steven Adler put magic into those songs on Appetite that the band lost once he left. He put life, gave the songs a heartbeat.

Now this film, deals with a different sort of drumming.
Jazz drumming.

I was aware of a limited amount of Jazz Drumners…but it’s fair to say now that I have a new found admiration and respect for the Jazz drummers out there. .

There are 3 core elements to this film that make it shine from frame 1.

First, this film is directed by Damien Chazelle. This is his second feature…and it’s astonishing.

Second, the cinematography here is by Sharone Meir…who should and would win a fucking Oscar for this film if the Hollywood illuminati didn’t run that carnival.

What these three of these people have created here is a dazzling, emotionally abusive,  follow your spirit, always push for your dreams.

They have delivered to us a gift of a film.

The type of film where, as I watched, I was completely aware that everything was in the right place.

Again, it gets rough, dirty and…
By the end…
Leaves you feeling like you just watched the end of a Rocky film.

I don’t want to say too much here, but I will say this…the final 25 minutes of this film are pure fucking hardcore genius.

The film stars a terrific Miles Teller as Andrew… 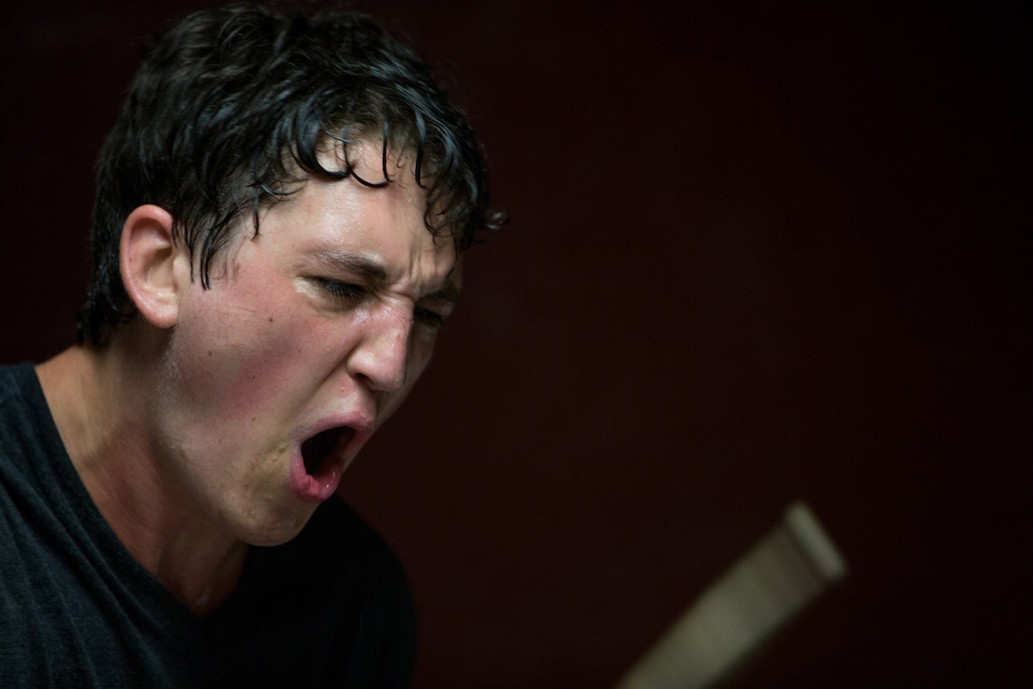 A high school jazz drummer attending the Shaffer Conservatory, the most prestigious and elite music school in the country.

When the film begins, we watch as he plays the drums in a room by himself…practicing his methods to, as we will discover later, gain the attention of the brilliant and much feared music instructor and conductor, Mr. Fletcher, a role that has long eluded the fantastic actor, J.K. Simmons… 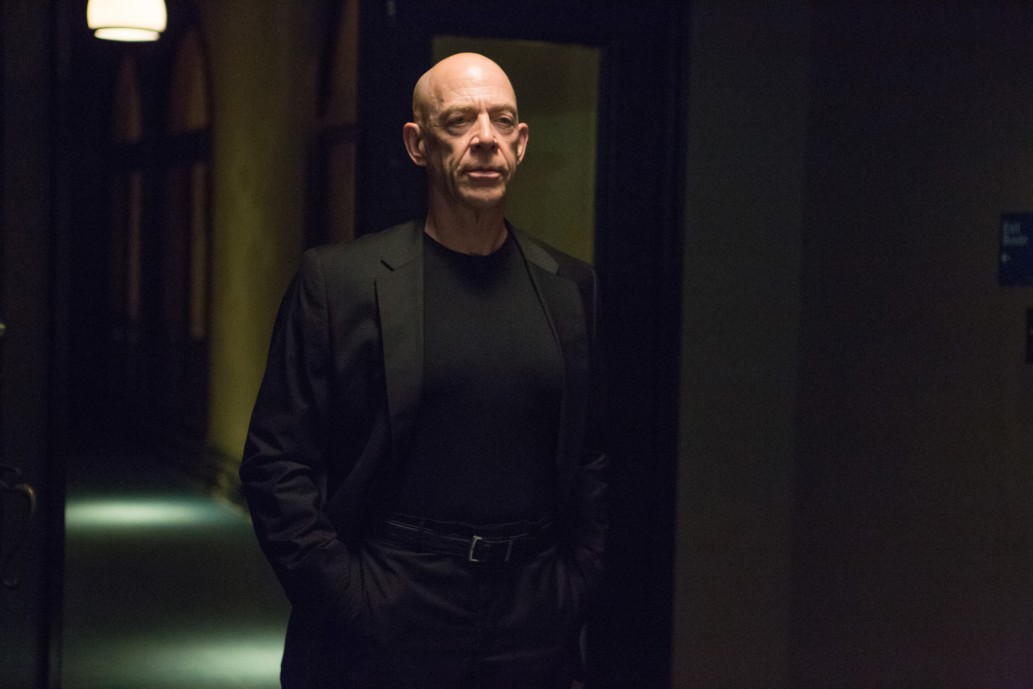 A role he was born to play, a role he takes full command of every instant he is on screen.

A role that will forever define his career from here on out.

Andrew dreams of becoming one of the greatest jazz drummers of all time one day.

When the film opens during his practicing, we cut to Fletcher who overhears him playing.

Andrew does his best, and when he looks up, Fletcher  has walked out of the room.

It is here their their relationship begins.

From the start, the camerawork is confident. The editing is exacting and precise.

Blasting between orchestra players, cutting rapidly from their instruments, to their mouths, to their eyes, to their feet, there is a rhythm being established here in the visual storytelling alone that will continue throughout the film.

Andrew is second drummer in the classes he attends. This means he is an alternate…he turns the pages of music for the first drummer and waits for his chances to sit and play.

During that first meeting, something eludes Andrew completely…which is that Fletcher sees greatness in him.

He recognizes his drive and passion…and even though he never showed it, he has set his sights firmly on him.

Fletcher conducts the conservatories highest tier orchestra,  these are the schools most gifted musicians…and they are all under his guiding force.

While Andrew is sitting in class, turning the pages of music for the first drummer, Fletcher walks in.

Without saying a word, the class teacher stands up and walks away from the front of the classroom…give Fletcher complete control of the room.

Fletcher steps up and start asking random members of the band to play their instruments and, without making eye contact, he finally gets to Andrew.

He asks both drummers to play a little something for him.

Dissatisfied in seconds, he turns to walk out of the room, then stops and calls for the drummer to come with him.

This is the equivalent of being drafted into the major leagues.

The first drummer is ecstatic, but Fletcher sees him stand and stops him,

Motioning to an astonished Andrew. He runs to him, Fletcher tells Andrew to show up the next morning at 6 AM at his classroom.

He is now going to be an alternate in the schools master Orchestra, under the tutelage of Mr. Fletcher.

The color hues change from a dead greenish fluorescent lighting outside of Fletcher’s studio, to golden hue in his studio. 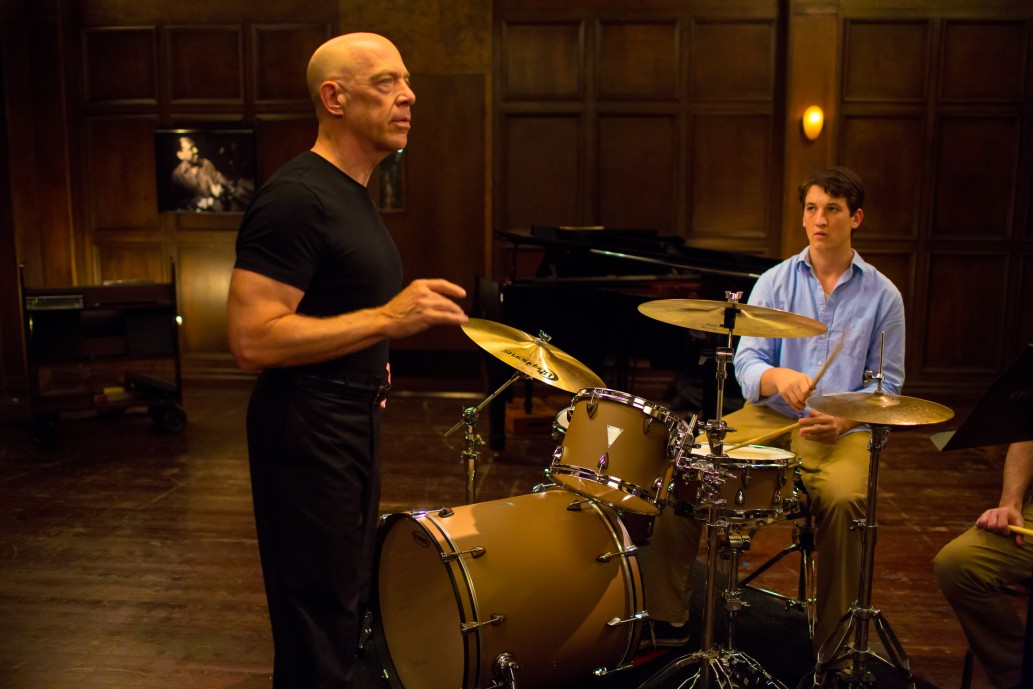 Everything is happening perfectly, the film is moving flawlessly.

Looking at the faces of the students while they wait for Fletcher to arrive that first morning, just like watching the teacher standup  a scene earlier inform us of the respect and power Fletcher wields.

Fletcher askes everybody to play “Whiplash”, a complex jazz musical piece…especially for the drummer, it is the pivotal piece of music that the films name is based on. 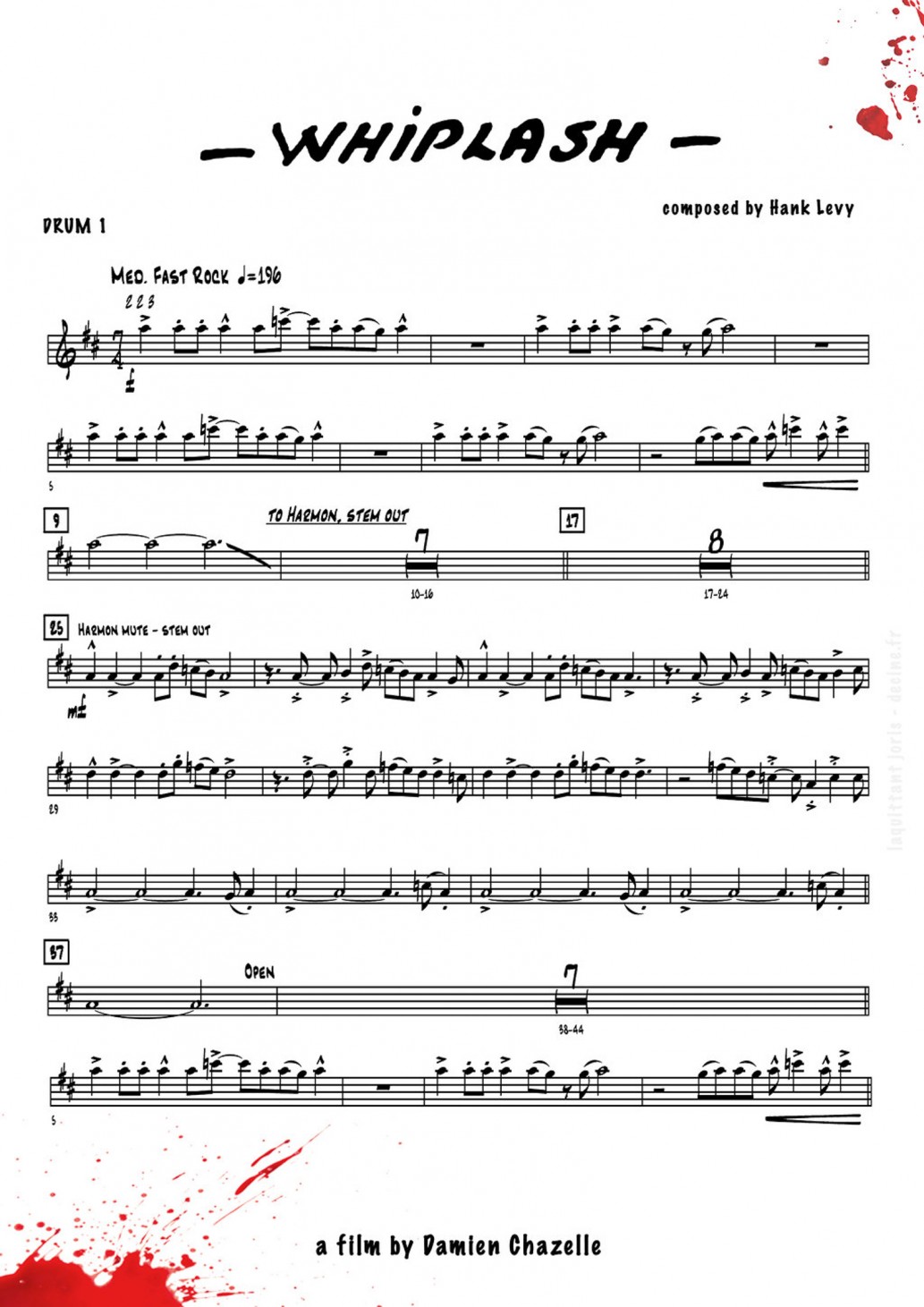 It doesn’t take long for us to see why Fletcher is so feared.

When he hears a member of the horn section playing out of tune…the image below is his exchange with that student. 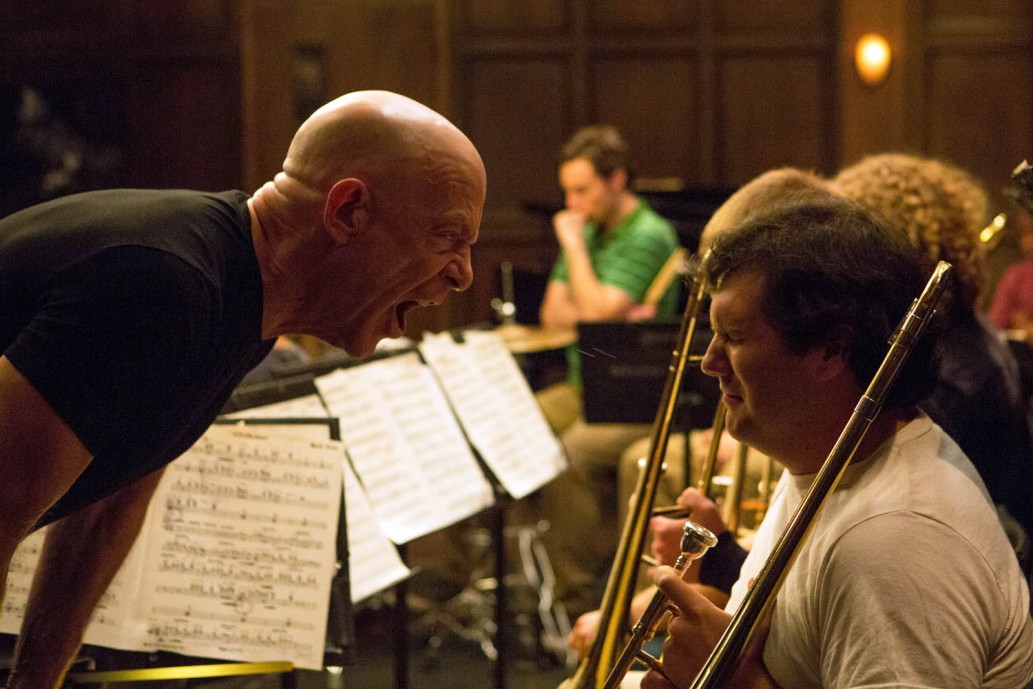 Quickly Andrew is asked to sit on the drum set to play.

Fletcher is kind and nurturing it first.

Then Fletcher asks him to play in tempo, which to us sounds fine…but it’s not. It’s off.

Fletchers mood quickly alters, and he unleashes his wrath upon Andrew instantly.

As Fletcher screams at Andrew to keep up the tempo while he plays the same measure over and over, Andrew cannot seem to satisfy him.

Fletcher begins to boil,  he then throws a chair at Andrew right before leaning in close to his face and hollering at him. 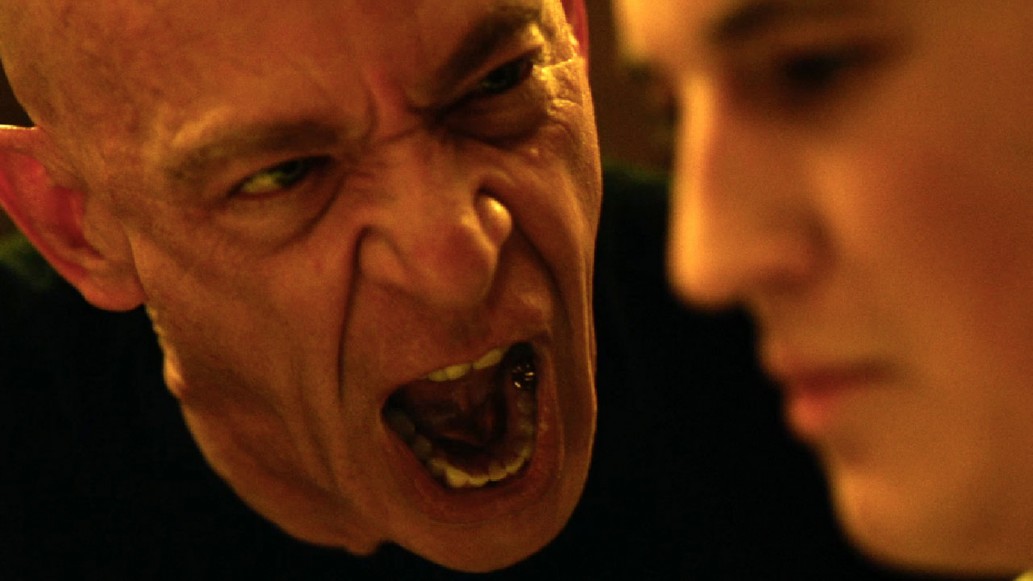 We see a very scared and timid Andrew begin to cry.

Fletcher demands Andrew say out loud to the class that he is upset, humiliating him in front of the entire band on his first day.

It’s sadistic and horrid to watch, but it’s magnificent to behold the music, and we are taken on these highs and lows…

Fletcher maybe being satisfied, to becoming a raving lunatic constantly throughout the film.

But we care, we become committed to the story,  to see Andrew succeed.

To sit here and watch how brutal it gets for him,  it’s painful…

Blood comes out of all of the knuckles on his fingers while he trains himself to become as fast a player as he can.

When Andrew finally wins first drummer spot in the studio Orchestra, we are thrilled for him.

But soon after Fletcher threatens him again by bringing in another drummer to replace him unless he can play in doubletime hyper fast.

Fletcher pushes three drummers to the brink of madness for hours, all to push Andrew to perfect his technique.

Where the story ends up,
you begin to think you see where it’s headed… especially at the end, but prepare…

Because it was by the end of act three, I was screaming out loud:

The end does justify the means.

If you watch with headphones, turn them up. The music is half of this story,  you need it loud.

If you’re at home and some people don’t like it when the 5.1 receiver is on too loud…

Wait for them to leave, then blast this fucker.

The sound mix alone will blow you away… from the deep bass of the bass drum and cellos, to the high notes of the cymbals, to the clarity of the snare drums and the horns.

You feel every fucking beat of this film…

And that’s on all fronts. 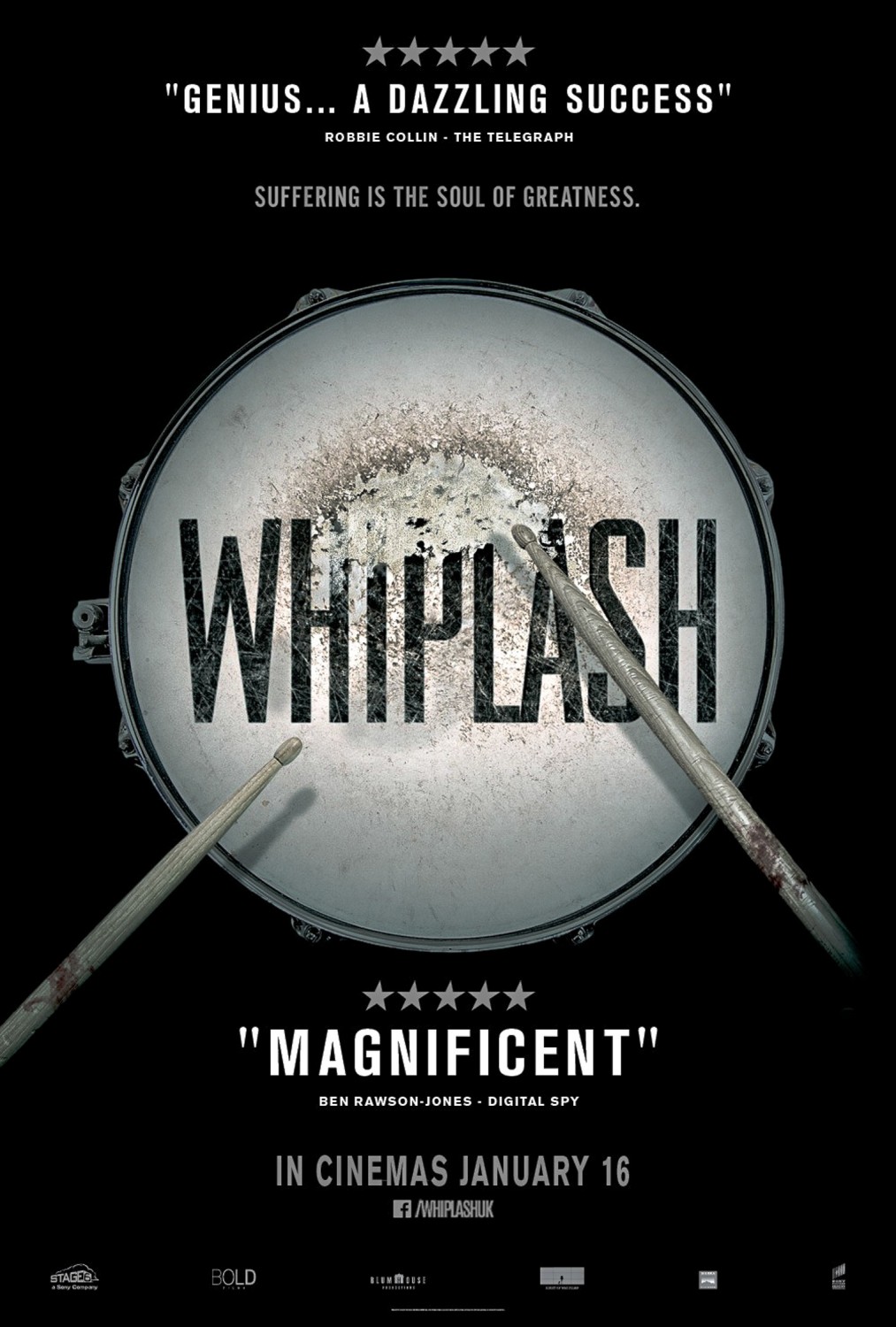 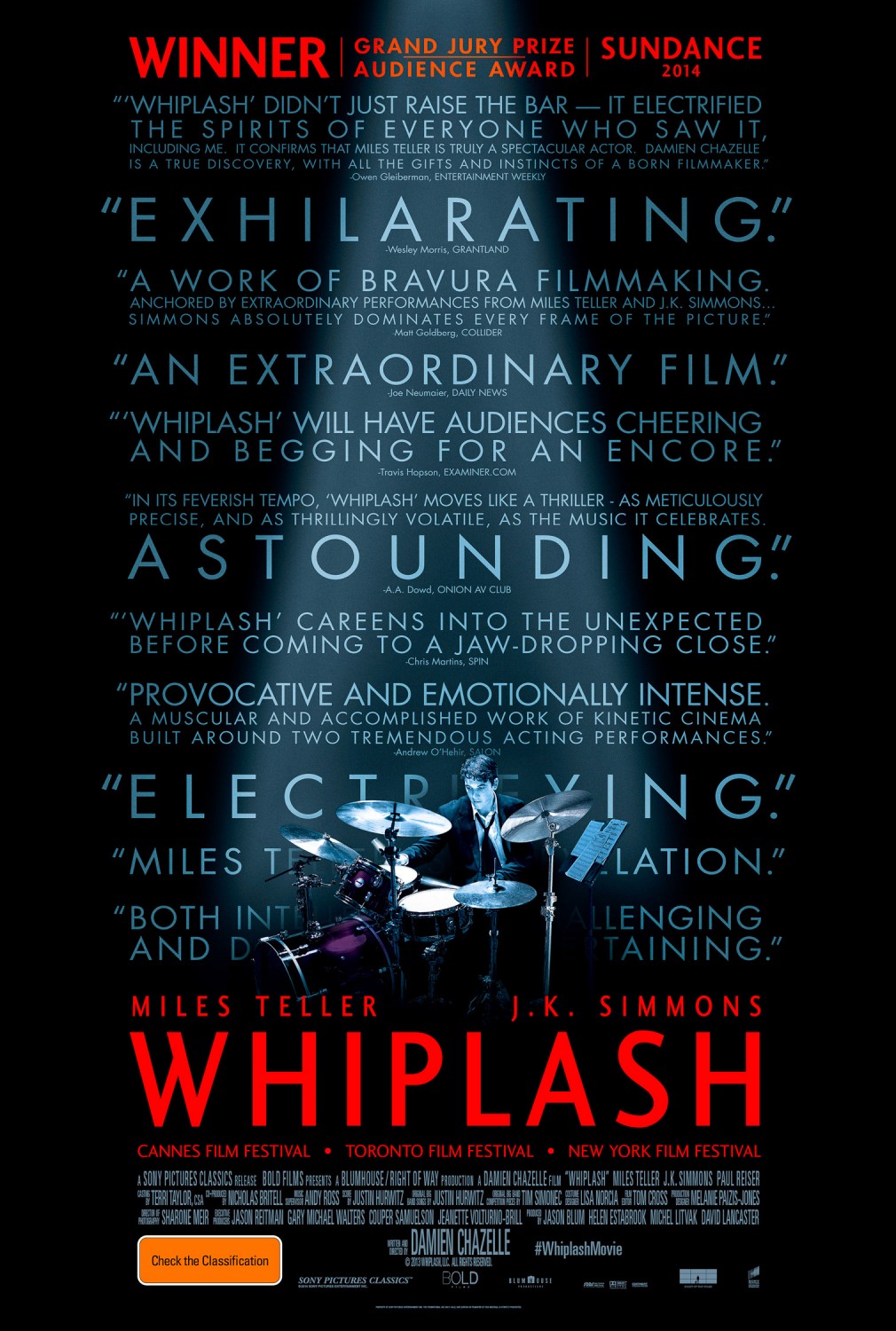 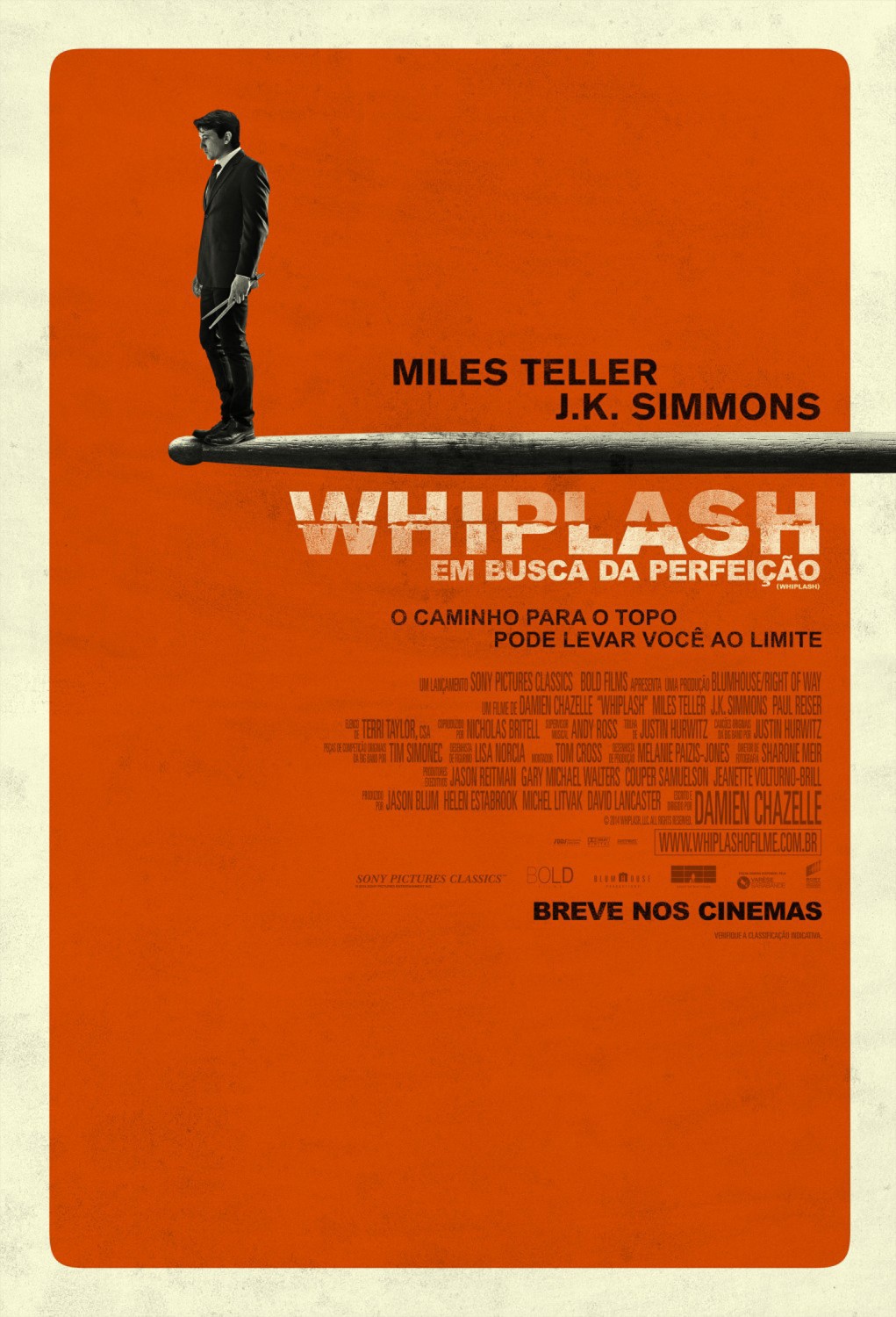