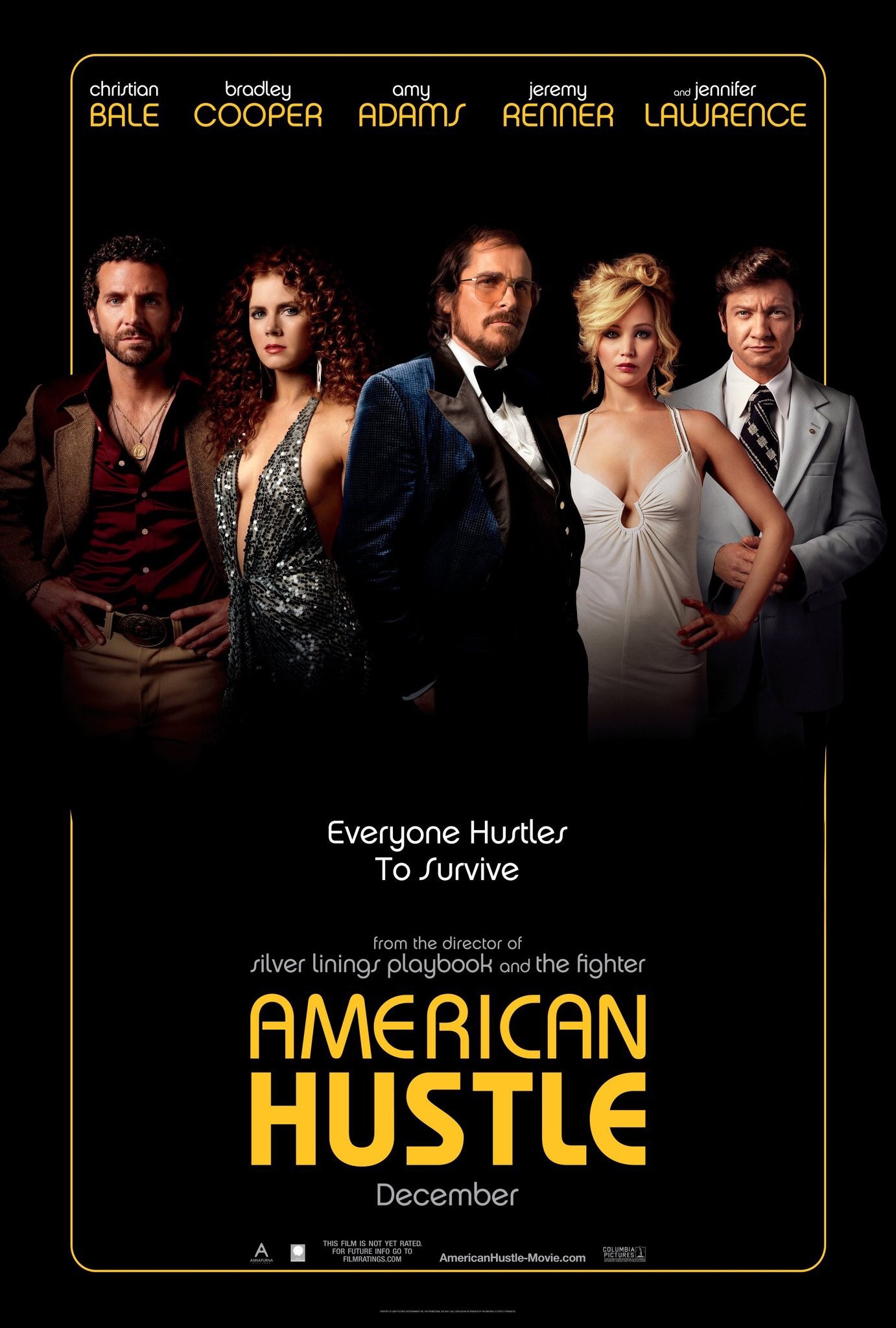 What up yo.
I just saw this film.
Let me tell you something…

From the moment this film started,
From it’s opening frames,
There was no doubt in my mind whatsoever,
I was in the presence of high-octane,
super-unleaded,
Gasoline.

It didn’t smell like gasoline when I first saw the ads…
And the trailer,
It looked good…
But I didn’t smell gasoline…

Then I watched it.
And as soon as American Hustle opened,
that smell….

That wonderful smell of gasoline hit my nostrils,
Made my eyes water and glaze over

Music, Duke Ellington music blasts onto the screen…
Then we see…

“SOME OF THIS ACTUALLY HAPPENED”

When we next hear this Duke Ellington number, Christian Bale‘s “Irving” & Amy Adam’s “Sidney” will be on their first date, enjoying one of their favorite pieces of jazz music and Irving will remark as the song blares open, the very section that opened the film…

As he plays air conductor to the big band brass music, Sidney stares at him.

His gut, his toupee,
She falls in love.

Now I’m going to list off 3 things here, 3 elements to this film that elevate it in my mind to greatness:

It appears they were having a complete ball making this film. They knew they had magic, that they were doing something different and fun…exciting and original, and they were going to act their asses off…they were going to give themselves completely to their performances.

But it’s not just that.
It’s the teamwork.
Each performance here complements the other.
No one steals the show.

The stage is shared.
To have a film with some of the biggest stars around…
To have them all work together…
Off of each other…
Supporting, being generous and feeding off each other…
It elevates the energy of the film and all the performances dramatically.

Teamwork is rare these days in big bad Hollywoodland, unless you get actors that want to be part of a team and have a director who has the skill and know how to work with actors, knows how to direct them in a way that allows them to blossom and loose their inhibitions. To be free, comfortable and to perform at their fullest potential. This isn’t easy, and this isn’t something all directors necessarily want in their films…but this quality, extracting great performances from his actors is something Russell is becoming known for and it’s something that Russell is extremely good at doing.
He pulls top notch, gasoline drenched performances out of every single one of them.

Bradley Cooper:
Bradley is on fire, his performance here is electric, hyper tense, kinetic, from the heart, power hungry…power drunk…he puts out a panicked high octane energy throughout. You notice this quick. He is on fire out of the gates. Had me cracking up while he is in a holding cell with Adams’s Sidney.

I can’t recite the dialogue word for word, but as Sidney sits in a holding cell…she sits on the floor. There is no furniture in there.
We learn she’s been in there for three days as Richie walks in, and within 60 seconds he goes from accusing the cops in charge of her care of neglect, abuse and cruelty… to admitting that maybe it was him that decided to not put furniture in there. Maybe he wanted to make her uncomfortable. Then he admits that he likes her.

(whispers with hand over his mouth)

All in 60 seconds. Spitting the dialogue out like an AK, never stopping once for breath. You’re mind is processing what he just said as you listen to and process the lines he is currently saying…and they aren’t matching up…not making sense.
Then you realize…this guy’s fucking crazy.
He’s like that most of the film. If Cooper doesn’t do a ton of coke…he’s got to be a bit of a nightmare at times….and a helluva fun dude to hang out with.

Jennifer Lawrence:
Lawrence is, well Lawrence. She’s hot. Well, she’s smoking really, lets be honest. She plays Roslyn perfectly, to the tee. I grew up in Long Island.  I’ve met this girl. Lawrence is hysterical here, easily her funniest performance. Roslyn’s mind is constantly racing. We believe this watching Lawrence’s eyes dart around during a dinner party. There’s a term I heard a few years back that stuck right in my brain after I heard it…

“Crazy Eyes”
Some have a lot going on in their minds, almost too much for their brains to contain. All the thoughts are rattling around up there like a pinball in a pinball machine. Their eyes are wide and dart around a lot as they leap from conclusion to conclusion. They have “Crazy Eyes”

I hesitate writing that because many critics say that about every new film they are paid to praise (did I just write that, or just think it?)
But here, as with every film Adams is in,
She seems to take all of the experience and technique she has acquired in her diverse career up until this point,
She refines it and channels it into her performance which is why she keeps getting better and better.

She is a chameleon.She is maybe the best actress alive.

But I knew this already.

Christian Bale:
Listen.
You’ve never seen him this funny. The second he and Cooper argue and Cooper messes up his toupee., the look on Bales face, the way he says

“You shouldn’t have done that”

It’s is both hysterical…
And sad..
Because Irving is a big teddybear. Bale knows this about him and knows how to play him. It’s almost a heart wrenching performance…especially once Jeremy enters.

Jeremy Renner:
What Renner does here isn’t easy. He makes you love him. He plays a Mayor of New Jersey who is beloved by the people, by his fellow politicians, and Bale’s Irving is told that he and Adam’s Sidney must entrap Renner’s Carmine to secure their freedom after they are busted working a con on Bradley’s FBI agent Richie.

Sidney and Irving have fallen in love, despite Irving’s marriage to Roslyn. He and Roslyn are no longer in love, but Roslyn refuses to divorce Irving because, as she will admit later in the film, she doesn’t like change.

Richies offer to Irving and Sidney: teach him and the FBI how to con. Help Richie get 4 big arrests and then they can go free.

Hesitantly they begin to prep Richie, they teach him The Grift.

That’s when Carmine enters the picture. Carmine wants to save and rebuild New Jersey’s failing Atlantic City, but cannot get the funds appropriated by the federal government to do.

Richie sees this as the perfect man to set up. Irving doesn’t like it. Stay small. You go big, you’ll get in too deep and you’re puttjng yourself in danger.

But Richie is hungry and ambitious. He doesn’t want to hear about the possible consequences, he wants the big bust.

When Carmine and Irving meet, they bond quickly. Russell takes this dynamic and breaks our hearts because immediately we realize that Carmine is a good man, a family man, a caring man. Irving may be a con artist, but he has a heart of gold…and during the set up where Irving and Sidney must play people trying to find an investment for a fake Arab sheik…they approach Carmine and offer him the funds to save his city.

Again, Irving’s deception and crisis of conscious…this will only hit home if we also come to care for Carmine, which subtly Renner draws out of us.

This is where Bale comes in.
Irving caring for Carmine validates him for us. Because we know from the love Irving receives from the woman in his life, flawed maybe, but this is a good man at his core…and we trust his judgement.

This is Russell’s directing style coming to play. He handles these relationships expertly. These performances need to happen exactly as they do to make the emotions of the film work as well as they do.
Russell draws performances from actors as well as Scorsese. As well as Paul Thomas Anderson.

Russell also directs like Scorsese here. The camera shots, the 150% dedication of the actors and…one of the most important elements of this film, the music.

I haven’t heard a film utilize music this well since Scorsese’s “Goodfellas”.

And that’s about as massive a compliment as I can pay a film. “Goodfellas” is the holy grail.

You’ll hear a song, watch the footage… the movie wouldn’t work as well without each element in place as it is..,but the music man, the music is so perfectly chosen for each sequence after 4 or 5 tunes I was in awe. The movie was this finely tuned machine anyway, but what Russell does here with the music is visionary.

The whole films feels like a great party, with great music, and great people.

There are films with ensemble casts like this where we don’t want to see certain characters, we wait for the scenes with the other actors.

That’s not this. This is tight. It’s driven. From the opening blast of music. This isn’t just the actors at the tops of their games. This is Russell showing you how goddamn good he is.

If you haven’t see it yet, look forward to when you do. This is a great film, like a great album from start to finish. It’s filled with all the best aspects of great film making and was an absolute pleasure to behold.