Today I have the distinct honor and pleasure to share with you an interview I conducted with one of the starring actors in the 2015 docudrama, Soaked in Bleach.

The film’s director and co-writer is Benjamin Statler who based the film on the work of former Private Investigator, Tom Grant.

Soaked in Bleach is comprised of recorded interviews and actor portrayals that are based on facts gathered by Grant when hired in 1994 by Courtney Love, the wife of Nirvana’s front man, the legendary, Kurt Cobain. 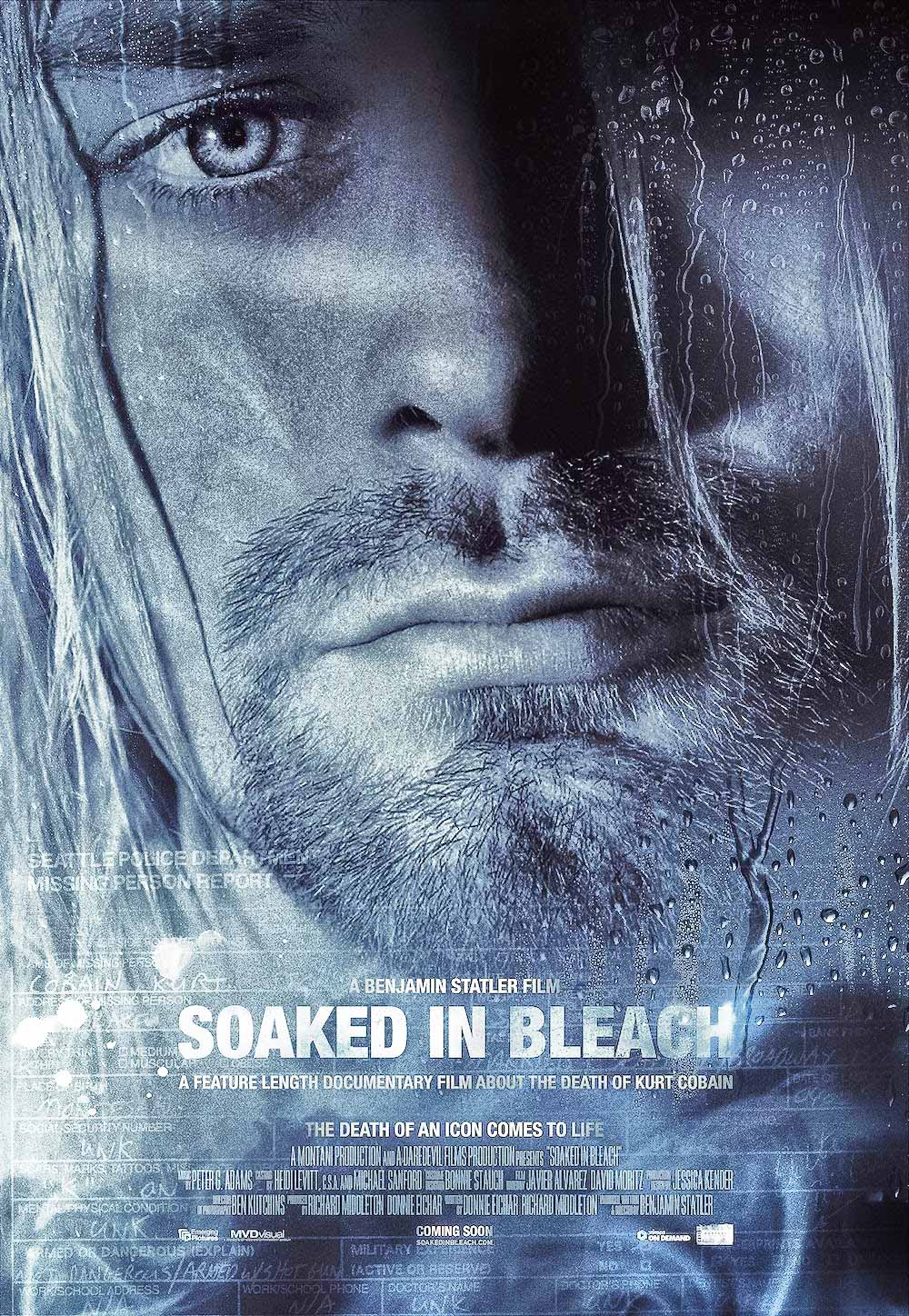 Love claimed Cobain had went missing after escaping a drug rehab in California and she feared her husband was suicidal. After a thorough investigation of the events surrounding Cobain’s alleged disappearance and death, Tom Grant was certain that Kurt Cobain did not take his own life, but rather, was the victim of murder.

Grant has relentlessly battled the Seattle Police Department to re-open the case on Cobain’s death for the last two decades. Soaked in Bleach is a moving, compelling portrait of Grant’s experiences and dedication to his beliefs.

I believe acting to be one of the most rewarding and challenging professions. When I first heard about Soaked in Bleach, I immediately wondered who would play the key parts. What would the atmosphere on the set be like with such a serious and emotional topic? How would the actors personally feel about the case?

Jerry Hauck, a seasoned, talented actor and writer was cast in the role of Don Cameron; a lead detective of the Seattle Police Department in 1994 during the time of Cobain’s death.

Jerry was kind enough to reveal what his experience was like working on the set and also a bit about his life and craft.

I found Jerry to be a sweet, kind, generous and humorous individual; which demonstrates what a terrific actor he is as his role in Soaked in Bleach called for none of those characteristics!

I want to thank Jerry for his time and enthusiasm. I urge you all to see the film. It was obviously a labor of love for every individual involved.

(BD) How long have you been acting and how did that particular bug bite you?

(JH) I’ve been acting since the 2nd semester of my junior year in high school (Um, that would be 1971…yikes).

I remember improvising a scene in English class about a father and his rebellious daughter. I must have really gotten into it, because afterwards everyone said that I should go down and try out for the next school play.

Well, I was mostly a cigarette smoking, pool player at the time, but figured what the hell. So I auditioned for the musical, ‘Bells Are Ringing’ and landed the role of Blake Barton.

I was very green and had a lot of fun upstaging everyone. Within 6 months I owned the entire theatre, if I may be so immodest as to say.

(BD) I read the biography that you wrote. What is your favorite kind of writing?

(JH) Well, haha, you wouldn’t know it by looking at Don Cameron’s unsmiling mug, but I write (and perform) a great deal of comedy.

I’ve probably written over two hundred live comedy events over the years, and have performed in over 1200.

And as opposed to writing scripts for TV or film, this is my favorite thing. We write it, rehearse it, and do it- Instant gratification.

Either they laugh or they don’t.

I’ve been very lucky…they usually do.

(BD) How did you become involved with Soaked in Bleach?

My agent called and also sent me the interview information. The casting person was a good one, so I did a little research into the project.

It seemed like it was going to be very cool.

What really struck me was the quality of Benjamin Statler’s writing! I read the material once (perhaps two or three pages) and knew the lines immediately.

It’s very rare when the words on the page so clearly define a character’s motivation and logically follow his thought process. So I went in and auditioned for Ben.

I had a feeling it went well. I said thanks, and as I was leaving, Ben stopped me and said:

“Jerry, if we were shooting that, it would have been a ‘Clint Eastwood’. One take and we’re moving on. Great job.”

So I left figuring THAT was the kiss of death and I’d never hear from this project again!

(BD) Did you do any research into the person of Detective Cameron?

(JH) You know…I had a real feeling for this guy right from the get-go.

He was obviously pretty arrogant in regard to this issue. So I (as Cameron) just kept thinking:

‘This Tom Grant is a total asshole. Who the fuck is he to question our police work?’

I actually borrowed my attitude and body language ever so slightly from Dennis Franz on the television program, “NYPD Blue”. Cameron was a little “Andy Sipowicz” like to me.

So, the short answer to your question is ‘no’.

(BD) Was it a difficult part to play?

Yes in the sense that I REALLY wanted to serve the material well and make sure that his portrayal was exactly what the film makers wanted.

Ben Statler, Tom Grant, who most certainly is NOT an asshole, Richard Middleton and Daniel Roebuck ALL mean a lot to me.

I hoped to live up to their expectations. Nicest guys I’ve ever met.

But what WAS easy was just doing it. It was all right there on the page. I just had to stay out of my own way.

So I followed Ben and Danny’s lead and it was a lot of fun.

The highest compliment that I ever received was when Ben said to me:

“I can see that you’re a really nice guy. How can you play such a total jerk so convincingly?”

That made my day.

(BD) Do you have a definite opinion on the death of Kurt Cobain? If you care to share!

(JH) Absolutely I have an opinion; a very strong one!

So I had no preconceived notions either way when it came to Kurt Cobain’s death.

But Soaked in Bleach is a film that is full of facts, proven evidence, and indisputable testimony.

Kurt Cobain was murdered, plain and simple. And I defy ANYONE to watch this film and then state otherwise.

(BD) How would you describe your experience working on the production?

This is a VERY important film on numerous levels.

Besides the incredibly important subject matter though, the PEOPLE that I have met are what makes it so outstanding.

Everyone is so level headed and full of common sense.

There hasn‘t been a ‘Crazy Conspiracy Theorist’ in the bunch.

It’s been good people who want justice for Kurt.

They just want a fair shake.

They just want the case to be REOPENED and let’s see where it goes.

And I’ve made myself available because I want to contribute, man.

(BD) What do your plans for the future involve?

(JH) Well, I have a daughter in No Cal, whom I love dearly.

I’m going to spend some time with her.

My pet turtle, Little T, should mercifully be packing it in after a long spring-summer of laying eggs. So that’s cool.

As far as acting and performing, I’m always looking for the next well paid gig.

PLEASE let there be one!

For more information on Soaked in Bleach, please visit the Facebook page: https://www.facebook.com/soakedinbleachthemovie

SOAKED IN BLEACH reveals the events behind Kurt Cobain’s death as seen through the eyes of Tom Grant, the private investigator that was hired by Courtney Love in 1994 to track down her missing husband (Kurt Cobain)