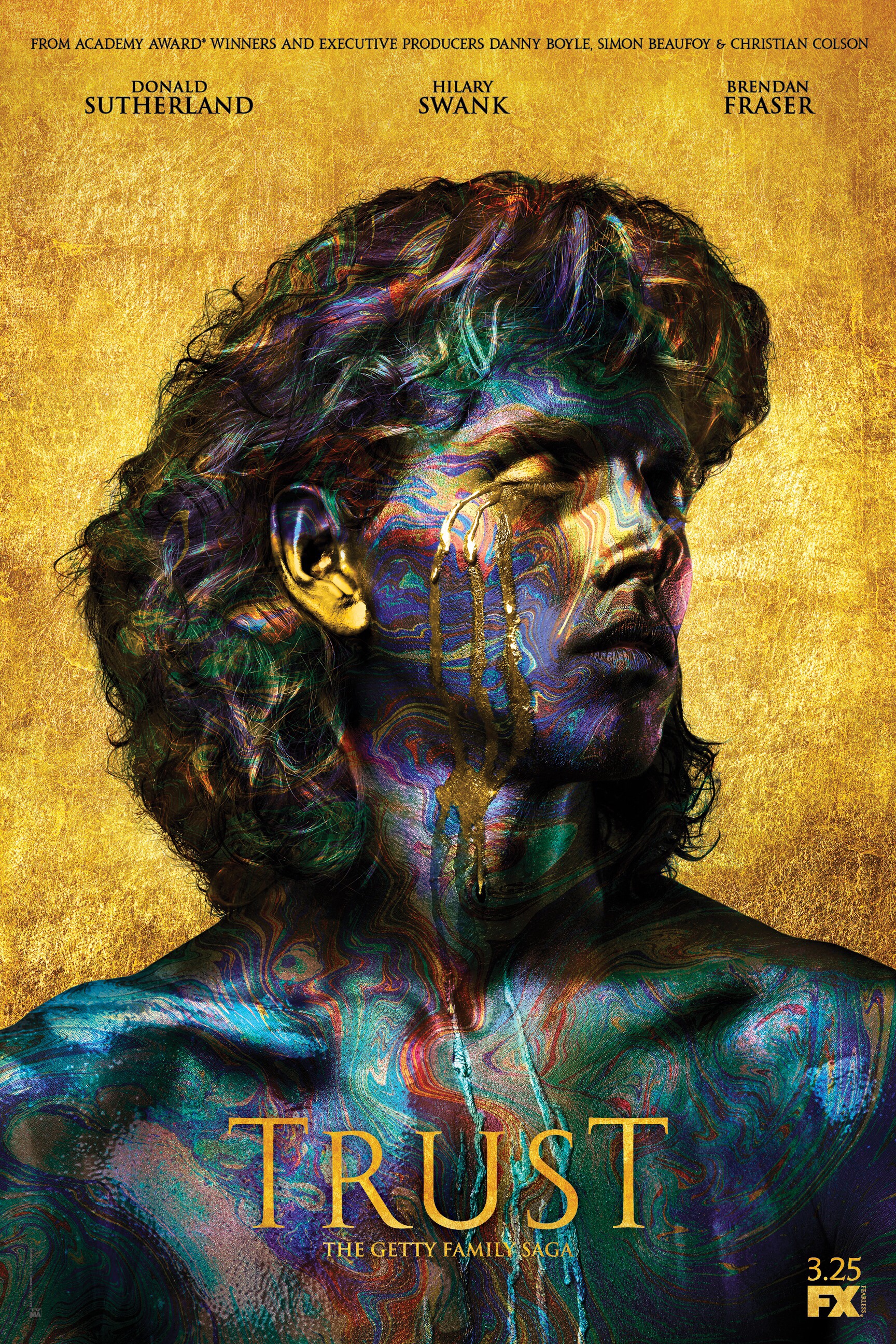 What Up Yo.
I have something for you. It’s called:

Trust is an American anthology drama television series created by Simon Beaufoy that premiered on March 25, 2018 on FX. The 10-episode first season, written by Beaufoy and directed by Danny Boyle and others, is set in 1973 and recounts the abduction of John Paul Getty III, then-heir to Getty Oil, while he was in Italy.

Not knowing a thing about the contents of this series, who was involved with its production, or anything else about the series…I began watching TRUST for the single fact that it stars one of the greatest American actors alive: 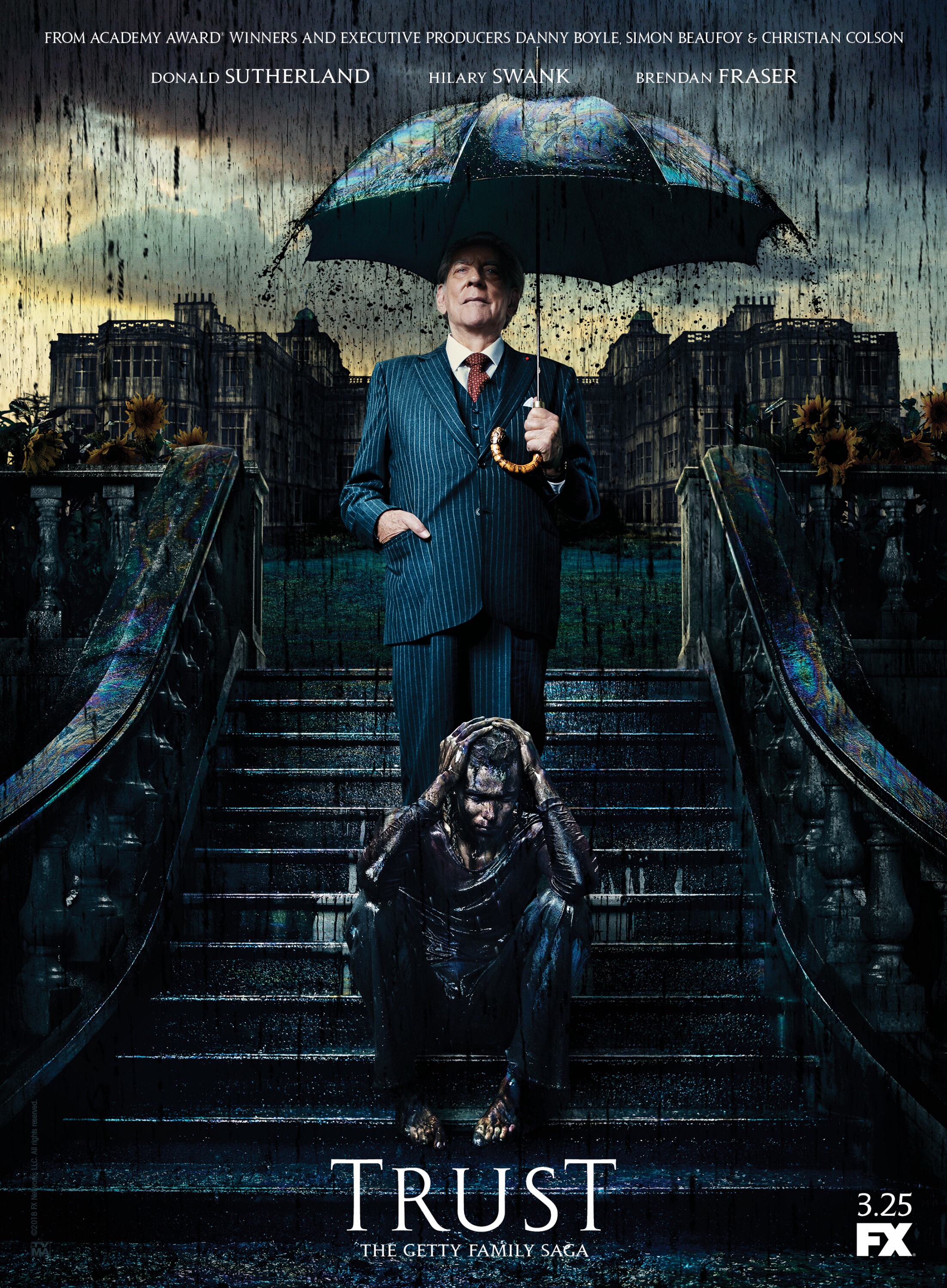 This is a long-format series from show-runner & screenwriter Simon Beaufoy who won an Oscar for adapting the screenplay for the film Slumdog Millionaire. The series is executive produced by Oscar winner Danny Boyle.

The story is a 10 episode account of the 1973 kidnapping of Getty oil dynasty heir, a then 16 year old John Paul Getty III.

The title referring to the curse of being related to one of the richest families on the planet and the money and implications that are assumed by all who come into contact with this teenager.

Growing up in Rome and Morocco, J P Getty III, played with a range of emotional turmoil and jubilant energy by English actor Harris Dickinson in his first leading role,  is the son of John Paul Getty, Jr. (Played by Michael Esper) and his first wife, Abigail “Gail” Getty (Played by Hilary Swank…in fiery welcome to return to the screen).

The series begins with a party thrown at the Getty mansion in England. It looks like it’s the who is who of high class society attending when suddenly a taxi cab shows up and we see the sneakers of a young 16-year-old JP Getty III step out of the cab and waltz into the mansion, looking completely out-of-place, but totally comfortable in his skin.

Now, at this point the credits have flashed on the screen and when  I see “Directed by Danny Boyle“. I stop dead in my tracks. I sit up and begin to completely fixate on what I’m watching.

Now, allow me to diverge a moment:

The golden age of television,  beginning in the late 90’s, has slowly over the last 20 years seen more and more of cinemas elite entering the long format arena. I want to say that the first time I was truly aware that mainstream actors and actresses, writers and directors from Hollywood were entering the realm of television was with the release of David Fincher’s Netflix powerhouse, House Of Cards.

Seeing David Fincher Executive Produce an amazing series with a cast leading with Kevin Spacey and Robin Wright signaled a massive change in the age to me.

It also worried me.

I knew eventually this beautiful untapped landscape would get trampled on by the money people in the film industry. We would begin seeing the same people that destroyed Hollywood and visual storytelling in American cinema begin to sink their teeth into the world of television. (When I use the term Television, I am referring to long-format high concept episodic series. I don’t care where they come from. Cable television, network television, British television channel 4 or itv, BBC,  Netflix, Amazon, Hulu…I am referring to them all.)  And that has happened to some degree,  but for the most part…the money hungry parasites have stayed where the big money is, so television and free thinking creative series, not compromised by the weekend fucking box office numbers  are still rolling out.

That said, Boyle and Beaufoy are welcome additions to the arena.

The production value is dazzling. The cinematography and talent is top notch.

The color palette and grandiose scale of the epic Getty estate is awesome. Photographed beautifully.

Danny Boyle directs the first three episodes of this series, and these episodes land crucial blows for what’s to come. The series at the time of this writing is currently on its fifth episode.

He dominates the screen, but in my eyes…when doesn’t he?

When Hillary Swank appears by episode two…the quality and emotional panic of the series is elevated 20 notches.

Without spoiling anything, what we are dealing with in this series is a young, free-spirited hippie, living in Rome with a ton of drug debt that has been racked up by the bloodsuckers his last name has attracted to his life.

These people have been buying cocaine and paying for it not with cash, but with a promise:

Before long, the drug dealers approach Getty III about the debt. They want their money back.

He is shocked and confused. When he asks how much he owes he is told $6000.

In an attempt to pay his debt, he is forced to go to England to see his grandfather, John Paul Getty I, to ask for help in the matter.

However his grandfather takes a liking to him when he sees the teenagers knowledge of art and after long, he names the young John Paul Getty III heir to the Getty Business Dynasty at a dinner party.

This is much to the dismay of the boys biological father, John Paul Getty Jr.

His grandfather agrees to pay him the $6000 after working for him on the oil rigs for 6 months to get to know the business he is going to control one day.

He has succeeded in securing the money to a degree, when his father, out of pure jealousy,  shows John Paul Getty I a European men’s magazine featuring his son Getty III makes and doing drugs.

Furious, the grandfather takes back his offer to his grandson and puts him on the next plane back to Rome the following morning, refusing to see him leave.

Once back in Rome, the young boy discusses a plan with his girlfriend, her sister and some other mooch:

“Lets plan to stage a fake kidnapping where I am being heals for ransom.”

Demanding a ransom from his grandfather will thereby pay off his debt.

It doesn’t even sound good when you write the idea out.

But, JP III says forget the idea in the end.

Only problem is, that he has already involved people in it, and those people have brought it up to the mafia.

The plan has been set in motion, and like it or not JP III is in fact kidnapped.

Playing the family head of security and the negotiator for the Getty family is Brendan Fraser.

A little older & little wiser, It’s great to see him again. He plays this role hysterically and is in top form here.

Now I can say a lot more…

Especially about the sensational acting of Luca Marinelli as Primo, the main kidnapper.

Watch it with me.

Like a fool I already know the story because I just read up on it. But this is a high octane, gasoline drenched ride,

This…is a must see.

Fantastic storytelling not to be missed.

Again, I am only halfway through the first season and FX has already expressed interest on a second season, a The Godfather Part II-esque prequel that will delve into the life of the young Oil Tycoon John Paul Getty Senior and his rise to power in the 1930’s.

Every episode is a banquet of masterful craftsmanship by some of the finest talent in the industry.