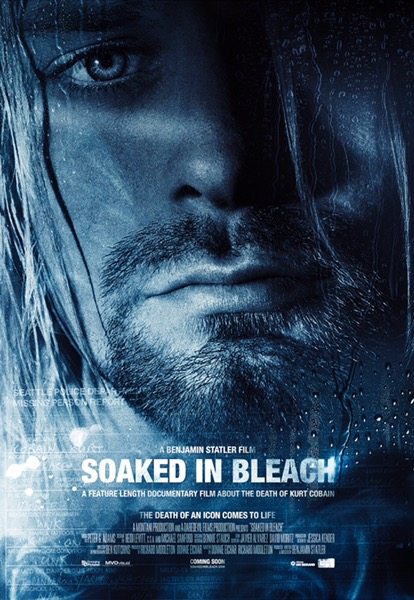 I’ve held back from stating my opinion on the circumstances surrounding the supposed suicide of Kurt Cobain out of respect for Francis Bean and his loved ones.

Not that I know her, but I still have my respect.
I have a great love for Kurt, as many of us who were touched by him do, and the mere idea that there was foul play in his death…

It isn’t easy to digest. 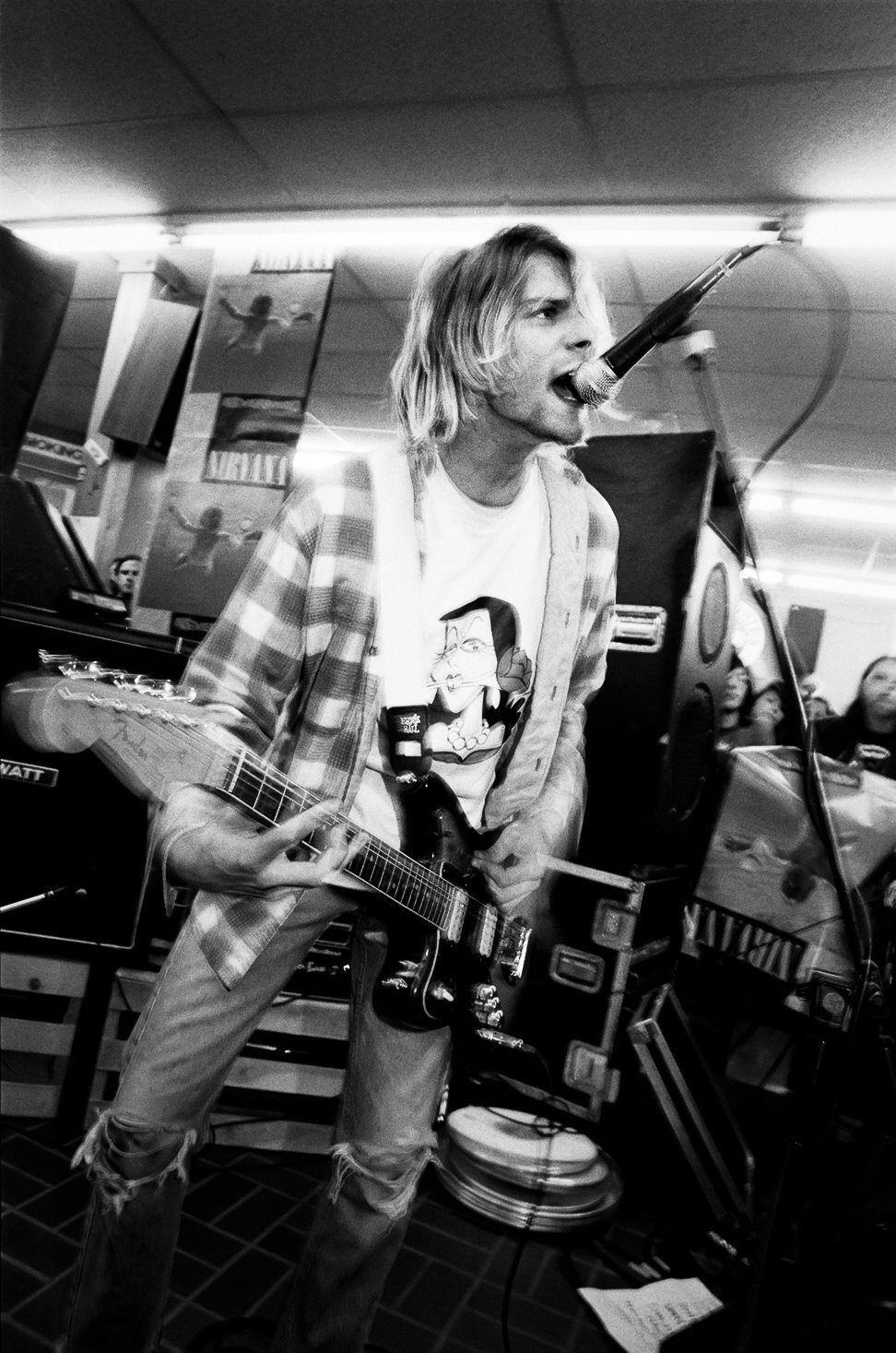 After I initially heard the rumors back in ’94, we didn’t have the resources at our disposal to investigate and educate ourselves on the facts.

And the resources are endless, such as…

The Death Of Kurt Cobain

I researched the facts and found that the questions were disturbing, and there were a ton of them.

In short, Courtney hired private investigator Tom Grant to locate Kurt when he went missing after leaving a rehab facility.

What he began to sense before Cobain’s body was discovered and after led him to feel that there had been foul play and he in turn has done his damnedest to uncover the truth.

Well, after running into walls and being silenced, to my surprise and delight, a documentary film has been made detailing the facts.

The trailer for this film is below.

I’ve said it before, I’ll say it again:

I’m not saying he was murdered.
I’m saying there needs to be a thorough, official investigation made into his death and the circumstances surrounding it.

Everyone close to him at the time needs to be questioned.
Everyone involved with the discovery of his body, all the questionable activity, all the potential motives that were never looked into to the best of my knowledge, which is limited to what is public information.

People took their lives they were so distraught.

He wasn’t just a rock star to us that cared for him, he was our reflection. He stood up and beautifully verbalized our fears, our insecurities and our rage at the establishment that rejected so many of us for being different.

And it was his sincerity that we all stood behind.

We looked around and realized, my God…there are millions of us who all feel the same way…

Then, he was gone.

I accepted what I had heard at the time.

We knew he was in pain.

When the seeds were planted that his departure wasn’t his choice, but instead that he was murdered for not being greedy, for not backing away from his morals…

For meaning every word he had said…

It all began to make an eerie sense to me.

He changed my life, many lives, directly and peripherally.

I hope this film helps crack this case wide the fuck open.

I’ll do whatever little I can to help wake people up.

Because if we’re not, and he was killed…

Then people will hear our screams again.

And we won’t stop until there is Justice For Kurt.

“Let justice be done, though the heavens may fall.”

My name is Tom Grant. I am a retired private investigator and former detective with the Los Angeles County Sheriff’s Department.

On April 3, 1994 (while conducting business as a California State licensed private investigator), I was hired by Courtney Love (who was in Los Angeles at the time), to locate her husband after he left a drug rehab center in Marina Del Rey, California. Ms. Love stayed in Los Angeles while I flew to Seattle to search for Cobain with his best friend Dylan Carlson. In fact, Carlson and I had been in the Cobain residence the night before Kurt’s body was discovered in the room above the garage.

The police immediately concluded “suicide.” I wasn’t so sure. Neither was Rosemary Carroll, Courtney Love’s own entertainment attorney. Ms. Carroll was also a close friend to both Courtney and Kurt. We both knew something was terribly wrong here.

After several months of intensive investigation, including dozens of taped interviews with Cobain’s closest friends and family members, I reached the conclusion that Courtney Love and Michael Dewitt, (the male nanny who lived at the Cobain residence), were involved in a conspiracy that resulted in the murder of Kurt Cobain.

It appears this was not the first attempt on Cobain’s life by Courtney Love, however, it was obviously the first to succeed.

I should point out here that the term, “conspiracy,” is merely a legal term describing the planning or plotting of a crime by two or more people. If I had reached the conclusion that only one person was involved in planning and carrying out the murder of Kurt Cobain, we would be discussing a “Murder Theory,” not a “Conspiracy Theory”.

My job is to call it as I see it. I don’t change legal terminology simply to avoid criticism in order to make my conclusions easier for the reading or viewing public to swallow.

It is what it is.

In December of 1994, I began speaking publicly about the suspicious circumstances surrounding Cobain’s death.

Facing the potential consequences of exposure, Courtney Love, her wealthy and powerful friends, her attorney’s and the symbiotic “rock press” have engaged in an effort to keep the public from learning the true facts about Kurt’s death.

These are people who are motivated by profit rather than truth. Courtney’s attorneys have consistently threatened those in various media outlets with “potential lawsuits” if these journalists were to give me a platform from which to discuss my investigation of the Cobain Case.

As I predicted when I first began telling the public about the details of my investigation more than 17 years ago, no legal, criminal or civil, action has ever been taken against myself or anyone in the media who has covered this story.

In spite of the hot air they’ve been blowing all these years, this investigation has received coverage in hundreds of major newspapers, magazines, television and radio talk shows around the globe.

The pathetic cowards of this world can only blow smoke. Once they’ve been exposed, they run and hide

The events surrounding the death of Kurt Cobain are filled with lies, contradictions in logic, and countless inconsistencies.

Here is just some of what you were never told…

COURTNEY LOVE WAS FACING A DIVORCE

SOMEONE WAS USING KURT’S CREDIT CARD

COBAIN WAS IN FEAR OF HIS LIFE

THERE WAS NO “SUICIDE” NOTE!

COURTNEY HAD ANOTHER NOTE SHE KEPT IN SECRET.

COBAIN WAS INJECTED WITH 3 TIMES A LETHAL DOSE OF HEROIN!

As you examine this case carefully, you’re going to discover there’s much more to the events surrounding Cobain’s death than what you’ve been told.

Criminal conspiracy is defined as an agreement between two or more people to commit a crime or to perpetrate an illegal act.

The end may be legal, but the planned means are illegal. For example, two persons making a plan to steal bread from a supermarket (illegal) to donate to a local food bank (legal) would be guilty of conspiracy.

According to the legal definition described above, there are literally thousands of true “conspiracies” committed every single day of every single year across the United States alone, plus many more thousands around the world.

“Conspiracies” are real. Ask any police officer or prosecuting attorney.

Questions From the Case 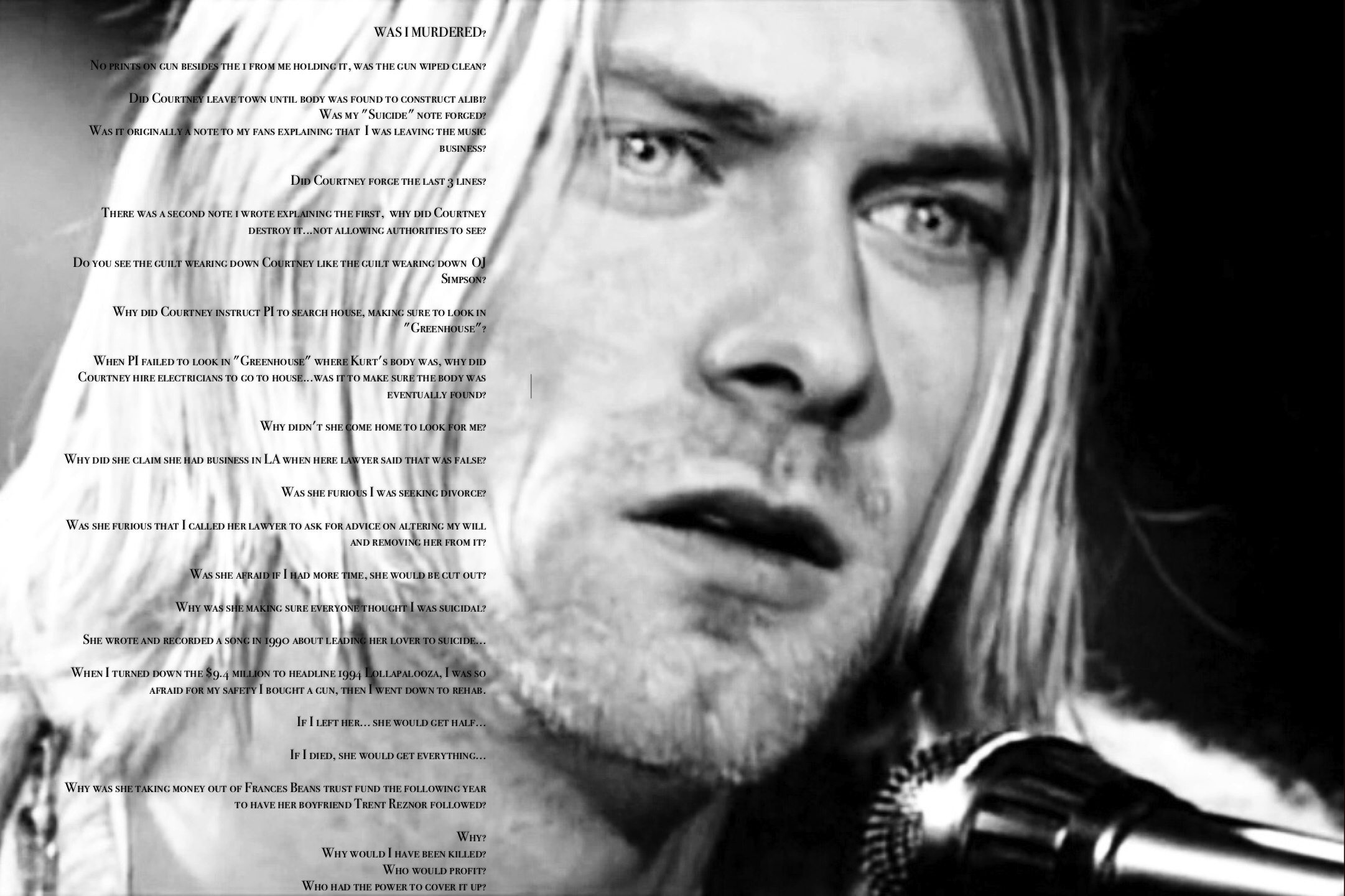